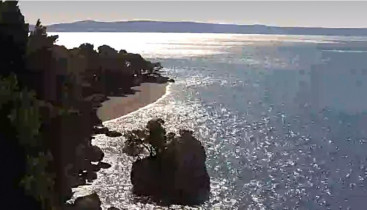 Take a look at the Croatian coast in the resort of Brela and its surroundings with the ONLINE webcam. Watch the current weather in Brela with a camera. View of a webcam on the coast with the symbol of Brela - a rock on the west side of Punta Rata - "Kamen Brela".

Croatia Baška Voda is the most visited seaside resort on the Dalmatian coast on the Makarska Riviera.

In the resort of Baska Voda you will find beautiful long pebble beaches with pine groves. The promenade passing through the town of Baška Voda connects the neighboring resort - Brela, Promajna, Bratuš and Krvavica.

Zoom out to see other webcams around this camera. Brela.

You are planning a holiday, a trip or a business trip in the next days and you are not sure what the weather will be like? Check out the weather forecast at www.yr.no - Croatia - Brela and you will immediately know if to wait a few more days. :-)

Webcam Brela on the map