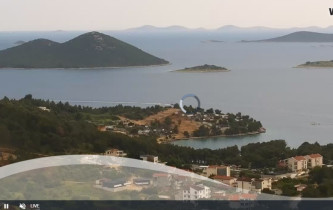 Take a look at the city of Pakoštane and its surroundings with the ONLINE panoramic webcam. Watch the current weather in the Croatian town of Pakostane. A view of a rotating panoramic camera with a view of Lake Vrana, the sea and the town of Pakoštane.

Zoom out to see other webcams around this camera. Pakostane - panoramic camera.