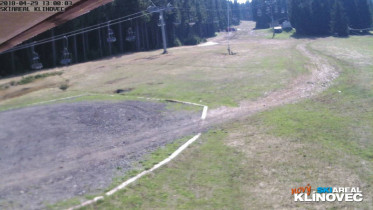 Take a webcam look at the current weather and snow conditions in the Klínovec Ski Resort. Webcam from the ski resort Klínovec with a view of the slopes.
Klínovec is the highest peak of the Ore Mountains with 1244m. Klínovec is located near Boží Dar. The lookout tower and the hotel, which are at the top, are the oldest and highest buildings in the Ore Mountains. The cable cars from the Klínovec ski area, which is the largest ski area in the Ore Mountains, lead to the top. With good visibility, it is possible to see Sněžka, Šumava Maple, Říp or Prague's Petřín from the top.

Zoom out to see other webcams around this camera. Ski Klínovec.

Webcam Ski Klínovec on the map