The village of Modrava is located in Šumava, in the district of Klatovy, not far from Kašperské Hory and with its surroundings it is one of the most beautiful places in Šumava. Modrava lies at the confluence of the Modravský, Filipohuťský and Roklanský streams, which connect the Vydra River. It lies at an altitude of 985 m and has a population of 78 inhabitants. Modrava is a former Šumava lumbering settlement, which is why you can visit the Lumbering Visitor Visitor Center with lots of interactive pranks. The Klostermann educational trail to Filipova Huta will take you around Modrava. The trail climbs through the forest along the Filipohuťský brook and is not intended for cyclists.
Filipova Huť, which belongs to Modrava, can be found by the Sokol mountain (1253 m) in the valley of the Filipohuťský stream at an altitude of 1,093 meters. It is the highest located seat in the Czech Republic.
Modrava has become a year-round center of mountain tourism. In summer there are a large number of bike paths and in winter modified cross-country trails. The journey through the valley of the Modravský brook will take you to the Luzenské valley and to Březník. The routes along the Roklanský brook will lead you to Tříjezerní slati and to Javoří sawmill, from where you can continue through Javoří slati to the lookout tower on Poledník.
There is a wide range of accommodation in Modrava, you can taste beer from the Lyer mini-brewery and try your physique in the rope center, where a children's rope park with playful obstacles awaits children and routes for children and adults end with a descent on the cable car.

Are you planning to go to Šumava to Modrava? Check out webcams from Modrava and the surrounding area with us. Do not rely only on the weather forecast, check with us the current status on the spot. Watch the current footage from the cameras from Modrava and you will immediately know what the weather is like.
Watch the webcams and nothing will surprise you. Do you know about other cameras from the locality of Šumava? Let us know. Add it to us by clicking on the link - add a webcam. To return to webcams from other municipalities and cities, select the Czech Republic link in the top menu. 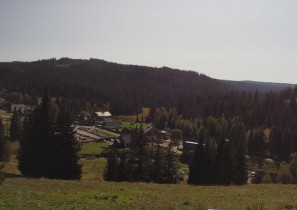 Follow the current weather and snow conditions in the village of Modrava na Šumavě on the ONLINE webcam. Webcam view of the Modrava valley. 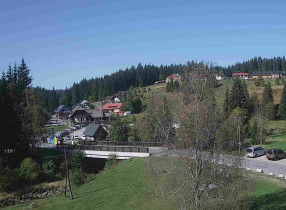 Follow the current weather and snow conditions in the village of Modrava na Šumavě on the ONLINE webcam. View of the webcam to the center of Modrava .

Map with webcams in Pilsen Region - Czech Republic. On the map you will find online cameras with information such as weather, traffic, individual views of cities and landscape ...