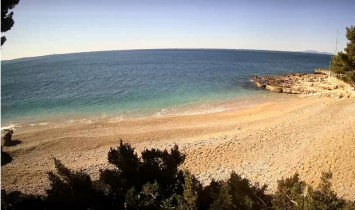 Take a look at the webcam in the town Ivan Dolac. Follow the current weather on the island of Hvar. Webcam view of Ivan Dolac beach on Hvar island.

The picturesque village of Ivan Dolac is located in a bay on the south coast of the island of Hvar near the village of Zavala. Ivan Dolac offers a peaceful and quiet stay with smaller pebble beaches and a rocky coast with concrete slabs.

Zoom out to see other webcams around this camera. Beach Ivan Dolac - Hvar.

You are planning a holiday, a trip or a business trip in the next days and you are not sure what the weather will be like? Check out the weather forecast at www.yr.no - Croatia - Ivan Dolač and you will immediately know if to wait a few more days. :-)

Map showing webcams on the island of Hvar - Croatia. Do you know of any other cameras from the Croatian region of Hvar? Add this webcam to us.